How Press Releases Fit into your SEO Strategy 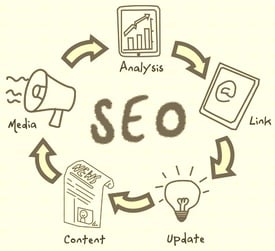 As you probably know, search engine optimization (more commonly referred to as SEO) is the key to ensuring that your site is seen on the internet, but what else do you need to do to increase exposure for your business? We’ve mentioned it before, but it’s worth saying again: you cannot simply build a great site and hope that it is seen. It’s a fact that SEO has become a mandatory part of website ownership and management, and press releases can be a very valuable tool to use as part of your SEO efforts.  Here are a few ways that press releases can give your SEO strategy a boost:

The success of your press release is highly dependent upon how often (and how effectively) it is being seen and shared, and it’s pretty easy to assume that most of the “sharing” that goes on today either occurs through Facebook (which has accounts for one out of every 7 people in the world) or Google+. Now, consider the fact that Google has implemented a social algorithm which will factor into the ranking system. People, as well as the search engines, have to know about your site and service. The combination of PR and social sharing accomplishes this exceedingly well.

Traditionally, marketing was based upon a funnel system. However, this is no longer the case. Because we live in an age where information is so readily available, people can find whatever details about your business that they want… and they can do it in a matter of seconds. Your press release serves as a kind of announcement to the public (your current and future consumers). It conditions them so that they are ready to invest in your product or services.

Some businesses may also use press releases as a kind of test to gage consumer interest prior to the launch of a product.

For example, when Google announced (via press release) the launch of Google Glass and its features, the response was not as positive as they hoped. Privacy issues quickly came to the forefront as potential clients worried that their privacy would be invaded by the camera feature and video recording. Google had to re-envision the marketing strategy.

All of this ties into SEO by way of online reviews and virtual “conversations” that are happening by or about your brand. Press releases can be a very effective means of pushing negative search results down.  Think of your press release as a means of silencing the negativity, while also providing opportunity for natural link building and increased exposure.

With over 250 million active sites on the internet, you have to make yourself known. Common sense will tell you that the traditional on-page SEO methods, while extremely important, is simply not going to be enough. Press Releases offer you a way to reach the masses (by offering a press release on a public forum) or to target selected group (such as having your press releases published in the online version of a county’s paper). The more exposure that you give to your site or service, the more apt it is to be successful.

The JUMP START blog and JUMP START products are brought to you by Flair Interactive Services Inc. Learn more about Flair.